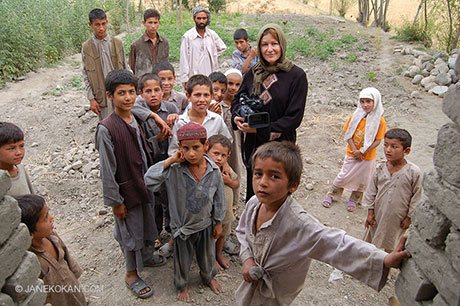 I first went to Afghanistan in 1997 with my late friend and colleague Carlos Mavroleon. He was found dead in his hotel room in Green’s hotel in Peshawar, Pakistan, in August 1998. (There are many theories on what happened to him including a drug overdose or a set-up.) Carlos was trying to investigate the terrorist training camps run by Osama bin Laden, which the U.S. was targeting. Washington had identified Bin Laden as the suspected mastermind behind the August 1998 attacks on U.S. embassies in Tanzania and Kenya. Carlos and I were on assignment to investigate the sinister and highly complex world of the poppy business in Afghanistan. It was a very complex task, tracking the path that the harvested opium poppy took to market, including the smuggling routes to the West. We interviewed: opium farmers, district officials, UN drug experts, Taliban representatives, warlords; and drug traffickers who claimed they were simply exporting a “cash crop” similar to coffee and tea. (Opium is the raw material for heroin.) Today, Afghanistan is the world’s leading producer of opium. The international community tried to introduce crop replacement strategies, but that didn’t exactly work out too well. Afghan farmers are now harvesting around 80 percent of the world supply. I witnessed young girls working in the poppy fields with male relatives early in the morning, instead of walking to school.

In 1998, I celebrated International Women’s Day in northern Afghanistan, with a group of women, who vowed to dedicate their lives to improving literacy rates in the war-ravaged country.

After that, I became a frequent visitor to Afghanistan, along with scores of other journalists, educators, humanitarians, military strategists, academics and peace negotiators. I filmed and reported on the plight of the advancement of human rights and education.

In 2007, I was part of a Channel 4 (UK) and CNN documentary team that investigated what had changed for Afghan women – both in rural and urban areas – since the 2001 military invasion by the U.S. and its allies. We spoke to fearless female human rights activists in Kabul and travelled to Herat and its environs, near the Iranian border, where female suicide rates were extremely high. Along the way, we interviewed some girl brides who were highly unlike to ever enter a classroom.

It’s been a very testing and bumpy road when it comes to “learning” in one of the least literate countries in the world. Schools have been built with great pride, only to be maliciously destroyed afterwards. Both male and female teachers have been savagely murdered. School girls have had acid thrown in their faces or poisoned. Other children and their teachers have been the victims of bombers who don’t believe females should be educated.

Many individuals and NGOs from all around the world from Dubai to Vancouver, built schools in Afghanistan. Canadian humanitarian, Mike Frastacky, who painstakingly built a school with his own funds and contributions from friends, ended up paying the ultimate price by losing his life in Afghanistan. He was murdered in 2006. I visited northern Afghanistan’s Baghlan province to report on the school that “Mr. Mike” built. It was an impressive operation. More than half of the students were girls. Recently, I have had difficulties in verifying if the school is still operational

I met another Canadian educator and humanitarian, Lauryn Oates, in Kabul, who continues to raise awareness with regards to the need for literacy. She raises some excellent points in this article. Courage, Education & Hope.

While much global contemplation has been focused on the military side of rebuilding Afghanistan, future financial support for education remains uncertain. Also, there is some concern over the American withdrawal from Afghanistan in 2014, and whether progress in literacy – made to date – will continue. Today, there are a lot more Afghan children going to school, compared to ten years ago. I firmly believe that boosting the literacy rates in one of the world’s poorest countries will put Afghanistan on the right track.