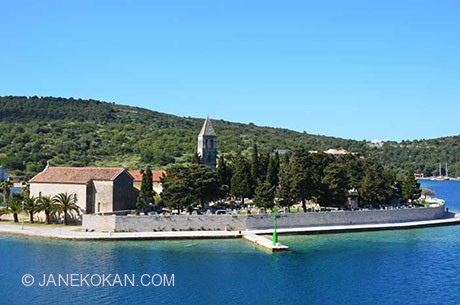 The Island of Vis, Croatia

The island is extremely lush with extensive vineyards, citrus orchards, pine, olive, oleander, fig, carob and mulberry trees, as well as several exotic species of cacti and palm trees. The sea around Vis is abundant with fish that one can sample in the many local restaurants.

Vis has a rich cultural and military history. The island was inhabited by the time of the Neolithic period (or New Stone age). In the 4th century BC, Dionysius the Elder, also known as the Greek tyrant of Syracuse, founded the colony of “Issa.” Later on, it became an independent city-state with its own colonies.

The island was under the rule of the Republic of Venice until 1797, which is very evident in the local architecture. Its Italian name was “Lissa.” Then, there was a brief rule by the Napoleonic Kingdom of Italy, followed by the Austrian Empire. There was an epic sea battle on July 20, 1866, which resulted in a victory for the Austrian empire, against the Italian navy.

The famous Battle of Lissa, took place on March 13, 1811, during the Adriatic campaign of the Napoleonic Wars. This was a pivotal naval battle between a British frigate squadron and a larger fleet of French and Venetian frigates and smaller ships commanded, resulting in a British victory.

Josip Broz Tito, the leader of the Yugoslav resistance moment used Vis as his primary hideout. The island was occupied by Yugoslav Partisans under the command of Tito and by a British flotilla in 1941 and 1943. At the end of World War II, Vis, has handed back to Yugoslavia. His cave is now a tourist attraction.

Today, the massive Greek amphoras used to transport oil, wine and food, sit, collecting dust in the museum of Vis. In the town, the Romans laid-down some intricate mosaic on the ground and installed their signature baths. The British left behind a fortress, built in 1813, that is now transformed into a nightclub during the summer months. And yes, it has a killer view of the Adriatic.

Vis was a former Yugoslav naval base, which meant foreigners were forbidden access until Yugoslavia started crumbling in 1989. This meant that the island never developed much of a tourist industry. When the ships of the Yugoslav navy sailed off Vis in 1992, the island opened up and visitors started flocking to the unspoiled island. Vis is one of over 1,000 islands that comprise Croatia’s gorgeous, pristine coast.

Today, Croatia’s own navy which was born during the Croatian War of Independence in 1991, can be spotted patrolling the Adriatic and docking on Vis island.

Croatia joined NATO in 2009 and today, Croatian peacekeepers and non-military personnel are assisting countries including Afghanistan and Kosovo. On July 1, 2013, Croatia will become the European Union’s 28th member. I will be monitoring the country’s progress in nation-building as well as assessing the pros and cons of joining the EU in these turbulent times.

I am working on an in-depth feature on the history of Vis, which will be available soon.