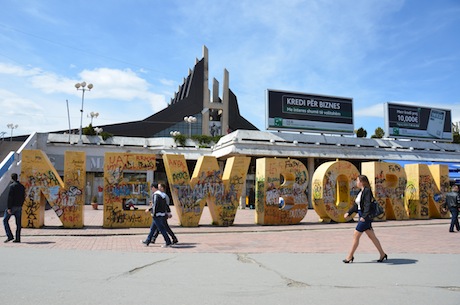 I wrote my master’s thesis on Kosovo, a small landlocked Balkan territory, when Yugoslavia was still officially a country. The title was: “The Kosovo Conundrum: Europe’s Albanian Question.” I spent several months in Kosovo living with both Serbs and Albanians, around the time the former Yugoslavia was collapsing. The situation was extremely tense. There were plenty of heavily armed riot police on the streets and the Yugoslav National Army (JNA) was extremely visible. The newspaper headlines read: “Storm clouds over Serbia’s Jerusalem”; “Yugoslavs sitting on Kosovo powder-keg”; Belgrade Orders Troops to Quell Kosovo Unrest”; “More protesters killed by police in tense Kosovo.” The Albanians had horrific tales to tell, as did the Serbian inhabitants of Kosovo. It’s complicated, as are all ethnic wars.

Kosovo grabbed the headlines again in the late 1990s, when late Serbian strongman Slobodan Milosevic sent in the Yugoslav army to quell the Albanian “uprising.” The Albanians, too, had an armed militia known as the Kosovo Liberation Army (KLA). Atrocities by both sides were committed. The small territory was soon littered with mass graves. A massive exodous of refugees soon ensued.

This was a newscast from April 2, 1999: (CNN) — The U.N. refugee agency said Friday the mass exodus of ethnic Albanian refugees from Kosovo has reached “nightmare proportions,” as thousands of people kept crossing into Albania, Macedonia and the Yugoslav province of Montenegro.

On February 17, 2008, Kosovo declared its independence from Serbia. Since then, the Republic of Kosovo has received nearly 100 diplomatic recognitions – including Canada, the U.S. and 22 out of the 27 present EU countries – as an independent state.

Unlike the United Nation’s newest country, South Sudan – which became the UN’s 193rd member on July 14, 2011 – Kosovo is not part of the UN club. Its athletes could not participate in the London 2012 summer Olympics under the Kosovo flag. Countries like Serbia, Russia, China, and India have not recognized Kosovo’s independence. (Serbia claims the territory as its own.) Talks moderated by the European Union are taking place between the two former foes.

The NATO-led Kosovo Force (KFOR) continues to hold the fragile peace together with some 6,000 international peacekeeping troops. The European Union operates a security and policing operation known as Eulex.

Nation-building is a huge challenge in the Balkans. The northern Kosovo town of Mitrovica continues to be a flashpoint. Civilians from both sides continue to be killed or injured by bomb or grenade attacks. NATO peacekeepers have also been targeted in Northern Kosovo as well.